Vai to perform two shows at the Iridium next week

TWO SHOWS AT THE IRIDIUM ON MAY 11th TO BE TAPED FOR ACCLAIMED SERIES, “FRONT AND CENTER”

Tickets On Sale Thursday, May 5th At Noon ET

May 5, 2016 – Next Wednesday evening, May 11th, Steve Vai will perform two exclusive sets at The Iridium in New York City — the most intimate room Vai has headlined in years.  The shows will take place at 8:00 pm and 10:30 pm.  Tickets can be purchased here beginning today at Noon ET.

For the 8:00 pm show: http://www.ticketweb.com/t3/sale/SaleEventDetail?eventId=6710435&dispatch=loadSelectionData&REFID=iridiumlist

For the 10:30 pm show – http://www.ticketweb.com/t3/sale/SaleEventDetail?eventId=6710445&dispatch=loadSelectionData&REFID=iridiumlist

Both Vai performances are being filmed for a future episode of the critically acclaimed public television concert series “Front and Center,” scheduled to air in early 2017 during the seventh season of the show.  This show also kicks off The Iridium’s annual celebration of its legacy as “The Home of Les Paul.”  With more events featuring iconic performers to be announced, The Iridium will be honoring its most famous resident guitarist with special performances leading up to what would have been Les Paul’s 101st birthday on June 9th.

Vai will be launching his Passion and Warfare 25th Anniversary World Tour beginning at the World Guitar Festival in Rouyn-Noranda, Quebec, on May 28, 2016.  Following that festival play and an extensive run in Europe that will include stops in Scotland, England, Finland, Sweden, Norway, Denmark, Belgium, Germany, Poland, France, Switzerland and many other countries, the tour will arrive in the United States in October.  Additional concerts in America and abroad will be announced at a later date. 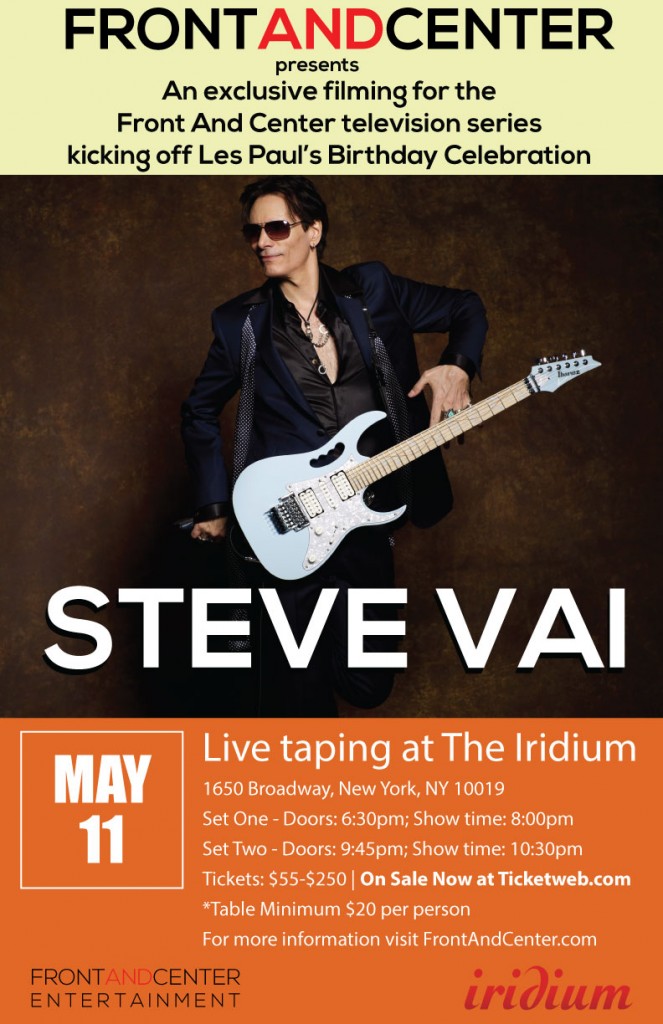