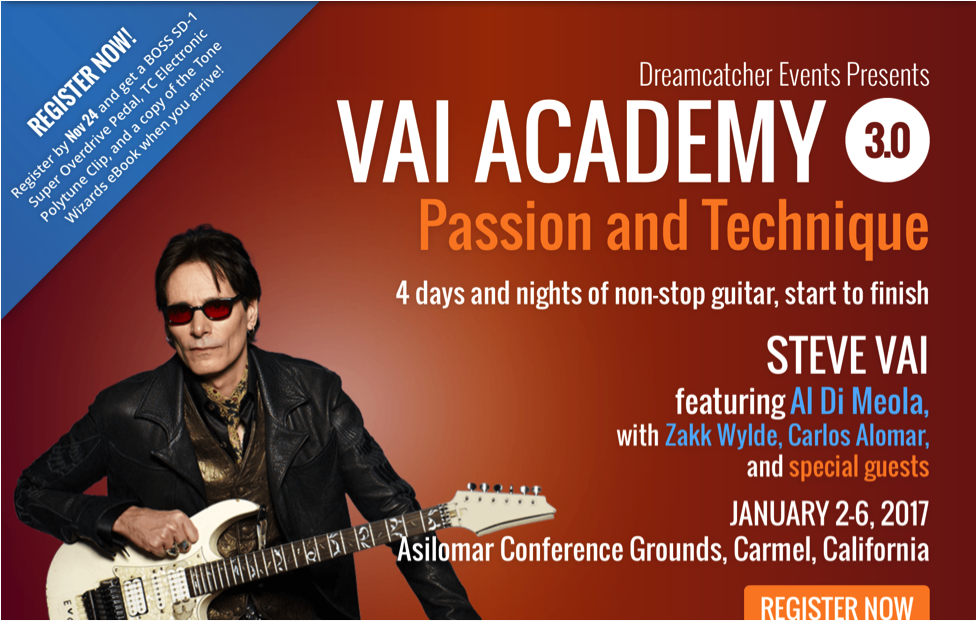 LOS ANGELES — Steve Vai’s third annual Vai Academy Guitar Camp — Vai Academy 3.0: “Passion and Technique” — will be taking place in Carmel, CA at the Asilomar Conference Grounds from January 2-6, 2017. Along with a star-studded lineup of special guests including Al Di Meola, Zakk Wylde, Carlos Alomar and others, Vai will stage the event for players and music lovers of all ages, levels, interests, and tastes. The four-day gathering offers once-in-a-lifetime activities such as jamming with Steve Vai and his band, as well as activities and workshops for master players, beginners, and enthusiastic fans alike. For more information, including a variety of registration options, visit www.vaiacademy.com. Register by November 24 and receive a BOSS SD-1 Super Overdrive Pedal, TC Electronic Polytune Clip, and a copy of the Tone Wizards eBook when you arrive to Vai Academy.

“I’m so excited that Vai Academy has been as successful as it’s been, and it seems to become more interesting every year,” Steve Vai, the newly-inducted 2016 Long Island Music Hall of Fame Member, remarked. “For 2017, we chose the Asilomar Conference Grounds in beautiful Carmel, California during the first week of January, which is great because everyone’s ready to start the year fresh after the holidays. This year, we’re going to focus on guitar technique, and we’ll talk about finding inspiration within yourself to write melodies and songs. The technique is the tool. It’s your most useful friend to express what’s inside. We’ll unlock that together.”

“Ultimately, the main goal of Vai Academy is for everybody in attendance to feel incredibly enthusiastic when thinking about their goals, their future, and connection to the instrument, and to make some new friends, maybe find a new bandmate or two, and have a great time.”

Now, a limited edition first time 180 Gram Audiophile vinyl of Passion and Warfare 25th Anniversary Edition is available — impeccably mastered and enhanced on two clear LPs with four recently unearthed bonus tracks from the album sessions, featured in a first time gatefold cover presentation and pressed at R.T.I. Fans can now hear 1990’s Best Album of the Year, as designated by both Guitar World and Guitar Player, like they have never heard it before. The 180 Gram Audiophile vinyl is available here: http://amzn.to/2g3vk1b

Vai is currently on a critically-acclaimed, 100+ date Passion and Warfare 25th Anniversary World Tour celebrating one of the greatest instrumental rock guitar recordings of all time. For the first time ever, Vai and his band are playing Passion and Warfare from front to back live at each tour stop. In a show review, Mass Live said Vai “bent notes and minds” and of the performance at The Fillmore in San Francisco, SF Sonic noted, Vai “delivered a masterful performance” and added “it was hard to not get wrapped up in the enthusiasm emanating from Vai, who seemed overjoyed to be playing these songs…his playing demands and holds your attention throughout, a mark of a true master.”

The North American leg of the tour includes these upcoming concerts:

Known for his intense, virtuosic and instantly recognizable guitar style, Steve Vai is also a visionary composer, consummate producer, and relentless live performer who sculpts musical sound with infinite creativity and technical mastery. At 18 years old, he began his professional musical career transcribing for, and then playing with, the legendary Frank Zappa. More than three decades, more than 15 million in album sales, and three GRAMMY Awards later, Vai has proven himself, in his own right, as one of music’s true originals. While many artists fit easily into a single category, Steve Vai remains unclassifiable. Throughout the years, Vai has awed fans of all genres with his exceptional guitar skills and musicianship while touring the world as a solo artist, a member of G3, with Frank Zappa, David Lee Roth, and bands such as Alcatrazz and Whitesnake. As an accomplished audio producer, Vai has written, produced, and engineered all of his solo albums — several released via Favored Nations, his own independent record label that has released over 70 albums by legendary musicians such as Tommy Emmanuel, Steve Lukather, Eric Johnson, Billy Sheehan, Larry Carlton and many more. For Vai, virtuosity and versatility are not mutually exclusive. He has created music for blockbuster films, bestselling video games, national sports franchises, corporate brand initiatives, as well as several accomplished orchestras around the world with whom he has performed. Vai remains one of the most honored guitarists of the past few decades. His career accomplishments have earned him honorary doctorates from Berklee College of Music and Musicians Institute. Vai has been honored multiple times by Guitar World and Guitar Player as Guitarist of the Year and Guitar World has ranked him as one of the Top Ten Greatest Guitarists of All Time.