Because the guitar is tuned in 4ths and the average player has a span of 6 to 7 frets, it is harder to voice certain types of chords on this instrument than it is on a piano or a harp, for instance. There are some unconventional ways to play chords on the guitar and get certain tensions and chord tones that you might not normally be able to get. One way is to detune the guitar so the notes you want are within your reach. Another way is to use the right-hand fingers to fret notes. Soon this technique will be less unconventional. [Note: these articles were originally written in 1984].

Start by playing an A barre chord in the 5th position: A on the low E string, E on the A string, A on the D string and C# on the G string. Stop there. Hammer the first finger of your right hand onto the E on the B string (17th fret).

Try to come up with at least 100 of these chords using your right hand in this manner.

Now try the same chord as above, but adding another right-hand finger. With your third finger (right hand), hammer the B on the E string (19th fret) as well, so that you’re now hammering two notes simultaneously with your right hand.

Another thing to try when building chords with two hands is to play a triad (4-part chord) in the higher register of the guitar, while fretting a bass note down with your right hand.

A cluster is a chord that is voiced with its chord-tones close together. These chord forms hit you right between the eyes when you hear them. When using conventional tuning, it’s possible to play clusters on the guitar only through the use of right-hand fretting. Here are some to hurt yourself with: 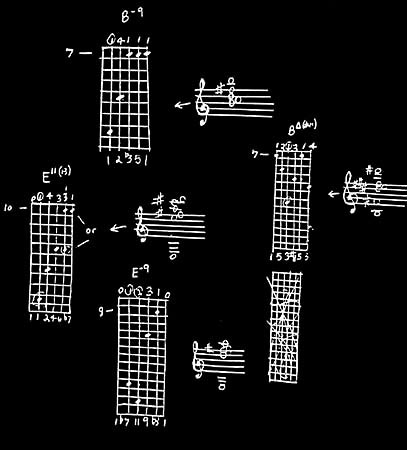