From the first day he discovered sound-on-sound recording, Steve was fascinated with the idea of owning a studio. His first sound-on-sound machine, a TEAC 1/4-inch 4-track recorder, was set up in an apartment at 1435 North Fairfax Street in Hollywood, and “Sy Vy Studios” was born.

The tiny bedroom held that 4-track, a TEAC 2-track used for bouncing tracks, a TEAC 4-track console, a Music Man amp, a cheap condenser microphone, a cheap fake plate reverb and an assortment of various stomp boxes. Many hours of nonsense were recorded here. 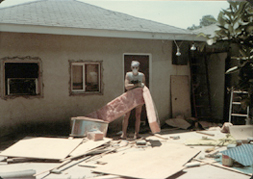 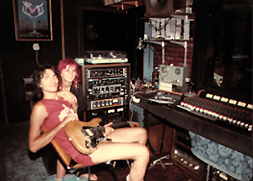 Saving up all the money he earned working for Frank Zappa ($14,000), Steve put a down payment on a house on 2264 Fellows Avenue in Sylmar, California. The house was perfectly situated on a quiet cul-de-sac on a corner lot. The previous owner, (Ol’ man Ray Kawal, a cool guy whose ghost still lingers in limbo about the place) had built this tool shed out in the back, and it was two separate rooms about 24′ by 17′ each, perfect for a studio.

Steve purchased a book called “The Audio Cyclopedia”, a bible for anything that has to do with audio and studios. Studying the book, he rebuilt the tool shed into a 2 room recording haven. 8 months and $3000 later, “Stucco Blue Studios” was born.

Purchasing a Fostex 1/4-inch 8-track machine gave the studio the multi-track credibility it needed. Carvin donated a console and an X-100B guitar amplifier and Frank Zappa, God bless him, loaned tons of gear to make the recordings a reality.

Everything and everybody would be recorded if they got too close. There’s a vault full of tapes from that period. Music recorded and released using this equipment includes Steve’s first solo record “Flex-Able”, “Flex-Able Leftovers”, and bits and pieces of things that were released in various following records.

Once a deal was struck with Capitol Records, the studio was upgraded to more contemporary equipment. A 3M-79 24-track, 2-inch tape recorder and a Soundcraft 35 input console were the main parts of the studio. Outboard gear included various compressors and delay units. A good portion of “Passion and Warfare” was recorded here and all the guitars for the David Lee Roth “Skyscraper” record as well. 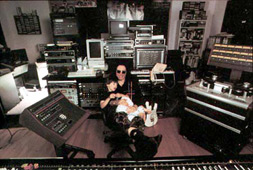 After the David Lee Roth tours, Steve & his wife Pia moved into a new home in the Hollywood Hills. The tall modern structure had a 1400 sq-ft. second floor that was perfect for building a full scale pro recording studio.

Some of “Passion and Warfare”, all of “Alien Love Secrets”, all the guitars to the Whitesnake “Slip of the Tongue” record, much of “Sex & Religion”, all of “Fire Garden”, the “PCU” score and most of the various one-offs were recorded in this studio.

This was a small studio that was put together in a small cabin-style
house in Lake Tahoe, Nevada. It consisted of a TAC Scorpion 35-channel
console, 2 channels of API mic preamps, 2 channels of Avalon mic preamps
and various outboard gear. Much of Sex & Religion was
recorded in this studio. Though Steve still has his place in Tahoe,
the studio has been disassembled and much of it was moved to Encino,
where it was reborn as The Harmony Hut (see below).

This studio is behind Steve’s home in Encino. Though he still maintains the Mothership in the Hollywood Hills, he & his family moved to Encino in early ’97 and of course it was only a matter of time before a studio sprung up somewhere.

The Harmony Hut is a small studio perfect for writing and recording, and its where Steve spends most of his time these days. We are in the process now of getting photos and a brief equipment list to post here.