Steve to host special screening of his new DVD in Portland, OR

Steve will be hosting a special screening of his new concert film Live In Minneapolis: Where The Wild Things Are at the Clinton St. Theater on Saturday September 19 at 7:00pm. Steve will be present to introduce the film and hold a special Q&A afterwards.

The film will also play on Sunday and Monday at 7:30pm (Steve will not be in attendance at these screenings).

Tickets are $14 on Saturday and $6 on Sunday and Monday. 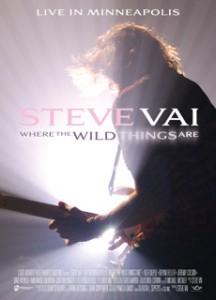 Due to production delays, the release date of the Blu-ray version of Live In Minneapolis: Where The Wild Things Are has been moved back to October 27th.

We apologize to fans for any inconvenience caused. We will be offering a blu-ray pre-sale with the CD and bonus download in the coming weeks. Check back soon.

Steve has been adding new preview clips from the DVD to his YouTube channel regularly. The latest is a clip from “Die To Live”. Check it, and others out on Steve’s official YouTube channel.

Don’t forget our “Live In Minneapolis: Where The Wild Things Are” Ebay Charity Auction – currently underway, with all proceeds going to Hollywood Arts! Visit Hollywood Arts’ Ebay page to bid on a vast array of music memorabilia!