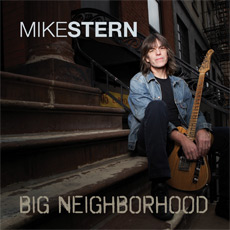 Five-time GRAMMY® nominated guitarist Mike Stern’s music has always come from a colorful and diverse part of town – a place where numerous artistic styles converge to create a fresh sound that’s rooted in jazz but refuses to adhere to rigid borders. Since his earliest recordings, this former bandmate of Miles Davis, Jaco Pastorius, Billy Cobham and other high-profile innovators has grafted elements of rock, blues, soul and more to his solid jazz foundations.

Big Neighborhood opens with the churning, rocked-up title track, in which Stern and Vai face off and create a thundering wall of distorted guitar riffs. “This tune obviously comes out of a Jimi Hendrix inspiration,” says Stern. “Steve rocks it with so much attitude. Along with the technique, he also has a lot of humor in his playing, which I love.” Vai reappears several tracks later in the Middle-Eastern flavored “Moroccan Roll,” a song inspired by the exotic music of Nusrat Fateh Ali Khan, the Pakistani vocalist who appeared on a number of recordings by Peter Gabriel, Eddie Vedder and other rock and pop artists of the West in the ‘80s and ‘90s.

Big Neighborhood is released worldwide on August 11 through Concord Records. For more on the record, and to order your copy, visit MikeStern.org. You can also preview the album on Mike’s MySpace.