Next time you’re playing and you feel as if you’re in a rut, try jumping and skipping strings for different effects. For example:

1) Solo and restrict yourself to playing on any two strings that are one string away from each other (high E and G, for example.)

2) Try skipping two strings and restrict yourself to only two strings (the A string and the B string, for example.)

3) Try skipping three strings. Confine yourself to only the low E and B strings, etc.

Try doing one of these examples for ten full minutes without leaving the parameters of the “rules”. Then try it for longer periods. You will find yourself coming up with melodies and licks you may never have thought of otherwise. This is also a good exercise in concentration.

Octave displacement is one approach. It consists of changing the octaves of some of the notes in a familiar lick, then relearning it. Here’s one example: 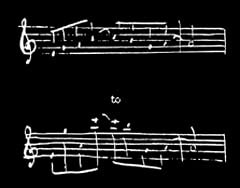 You can do this with your scales, too: 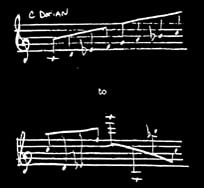 There are many variations with which you can experiment. Write a few thousand of your own.

Another type of octave displacement consists of playing a lick of, say, three notes next to each other. Then do the same lick, but drop it or raise it an octave. Try dropping or raising it another octave.

Do this with several of your favorite triads. String them together in different order. Record them with a drum machine and solo over them using the octave displacement and string jumping exercises outlined above.

But most importantly, have fun!