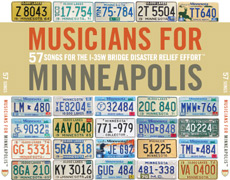 The compilation is dedicated to the survivors and those who lost their lives on the I-35W Bridge, August 1st, 2007 – and to their families and friends, the rescue teams and volunteers. All proceeds from the sale of this compilation CD go to theMinnesota Helps – Bridge Disaster Fund. Electro-Voice (the producer of this CD) hopes to sell out of the first pressing of 5,000 copies and raise $100,000 – in time for the Aug. 1 anniversary of the collapse.

Steve’s track “Without Me” is a soaring ballad originally recorded during the Ultra Zone sessions, and features Philip Bynoe on bass, Mike Mangini on drums and Mike Keneally on keyboards. Says Steve of the track:

“This piece of music is contributed to this project out of respect and love for the great city of Minneapolis, and with sympathy and support to the families who were affected by the August 1st, 2007 bridge disaster. We are perpetually rebuilding everything, from our cities to our souls. God Bless.”

In tandem with the release of Musicians for Minneapolis: 57 Songs for the I-35W Bridge Disaster Relief Effort Electro-Voice will also be launching a celebrity memorabilia charity auction for the same cause, which includes an Ibanez guitar signed by Steve Vai, two signed Les Paul guitars from Ozzy Osbourne/Black Label Society guitar phenom Zakk Wylde, a Dean bass signed by all members of Megadeth, and a custom Minarik Dick Dale flame guitar, among other items to be listed in upcoming days at www.electrovoice.com/musicansforminneapolis.