Musicians Institute has announced plans to award an honorary Doctor of Music degree to legendary rock guitarist, recording artist, producer, and composer Steve Vai. The award will be officially conferred during MI’s summer graduation ceremony to be held on September 18 at LA’s Wiltern Theatre.

After first achieving prominence as guitarist for the late Frank Zappa, Vai has gone on to win multiple GRAMMYs, repeatedly top critics’ and readers’ polls, and earn gold and platinum records while becoming the personification of contemporary guitar virtuosity. His latest concert DVD, Live In Minneapolis: Where the Wild Things Are, is set for release at the end of the month.

Describing why MI selected Vai for the honor (only the second awarded in the school’s history), Vice President of Education Beth Marlis said, “Steve Vai has not only inspired countless musicians around the world and played a major role in the evolution of modern rock guitar, he also embodies MI’s ideal of the artist-educator who combines relentless pursuit of his creative vision with a sense of responsibility for mentoring the next generation.” 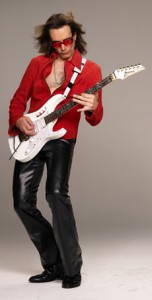