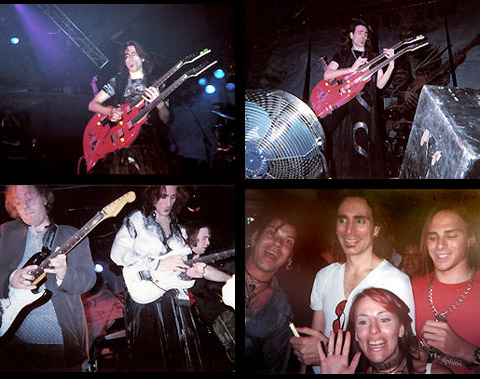 So, here’s my story from the recent Australian Vai tour. I’ll try to keep it brief because I could go on for ages. Basically, being a huge Vai fan, and probably an even bigger Keneally fan, I wanted to make the most of the recent Australian tour. I knew that just one show wasn’t going to be enough for me and so, I decided I’d be a bit crazy and go to all 5 Australian shows (a bit excessive, I know, but it’s not every day that they come to town and I got a package deal which kept the price down a bit). I had 3 months of holidays from university over the summer so I spent this time working my butt off packing shelves at a supermarket to save up the money for the airfares and accomodations. It was definitely worth it! (even though I was totally broke when I returned home).

The first show was in Melbourne. I got to the venue pretty early (as I did for all the gigs) so I could get a spot right up at the front. I was glad I did because while waiting outside for the Melbourne show, Steve came walking down the street (guitar in hand) and invited us earlybirds in to see the soundcheck. I don’t really need to say how fantastic the show was that night (and every other night). Next stop was Sydney (where I’m from) and I got to meet Steve in the morning at a record store signing. I got him to sign two pretty rare items for me — the original “Flex-Able Leftovers” EP (second cover) and my Loch Ness Green Jem777 guitar. I told him I was going to all of the shows, although I’m not too sure if he believed me (which is understandable). I had a MK “Sluggo!” shirt on and we both agreed what a great album that is (cool!). I got to meet Mike before the show that night and he signed all of his CDs for me and was ultra cool. The show in Sydney that night was pretty wild.

Next stop was Brisbane, and then Adelaide where I went to see Mike’s little acoustic concert at a music shop (thanks Jamie). This was the first time I’d ever heard Keneally material live and in person and it was an amazing thrill. Mike was real cool and appreciate of my “commitment” but I still couldn’t help feeling like some sort of crazy stalker or something (“The Wreckage Was Large” comes to mind). Oh well, Mike didn’t seem to care. After the Vai show the next night I got to meet the rest of the band and they were all really nice too.

The next night in Perth I went to Mike’s second acoustic show (thanks Gary). There was a bigger turnout and it was great. Mike answered a bunch of questions and played some Keneally classics. The final Vai show in Perth rocked. The aftershow shindig was pretty relaxed and we got in. Once again, everybody was really nice. We eventually pushed our way through the throng of people crowding Steve and said I’d been to all of the shows. I’m not sure if Steve recognized me or not (Steve obviously sees a lot of faces), but I did have my “Sluggo!” shirt on again. I guess he must have believed me because the next thing I knew, he was taking off his chain necklace and handing it to me! I was shocked and I couldn’t believe he was serious. I mean, how cool is that?! I thanked him repeatedly, got a photo, and that was it. I said bye to Mike, and thus ended one of the most exciting and incredible weeks of my life!

So, to Mike Keneally, Dave, Philip & Mike — thanks for the great shows and for being so cool. And to Steve, thank you so much for your unbelievable generosity and wonderful music.

So there you have it. Feel free to include this in the “Your Letters & Photos” section of the website, that is, if you can take the time to type it up. I would have sent it by e-mail instead of in the post, but I don’t have a scanner for the photos.

Thanks, and all the best —