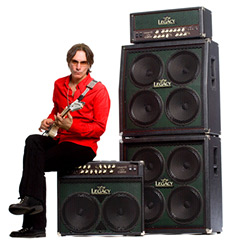 After years of speculation, rumors, development and testing, Carvin and legendary guitar virtuoso Steve Vai are proud to introduce the new Vai Legacy II Series amplifiers. These all-tube 3-channel amps are the result of countless hours of design and development by Carvin engineers, working closely with Steve Vai. Additionally, the Legacy II has been reviewed and “tweaked” by renowned amp designer Benjamin Fargen of Fargen Amps. According to Benjamin Fargen, the result is “a powerful blend of high-end boutique sound and rock-solid American manufacturing.”

“The Legacy II is a dream amp. It’s simple, versatile and the sound is creamy and warm. Finally there is an amplifier that has a Master Volume control that can raise or lower the overall sound coming out of the speakers without changing its saturation or tone. Although the sound has retained the integrity of the original Legacy, there is now an added channel that acts as a boost on the clean channel giving it a bit more hair. No need to keep dreaming, it’s here.” – Steve Vai