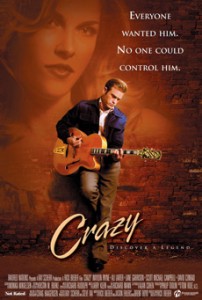 Immediately after the screening, cast member and recording artist Stacy Earl will sing, accompanied on guitar by Evans Forde, who appears in the film as Nashville music legend Chet Atkins. Their set will be followed by a Q&A with director Rick Bieber and Waylon Payne, who stars as Hank Garland. Click here to buy tickets!

Crazy chronicles Hank Garland’s rise to fame in the Nashville music scene, from playing on hits for icons including Elvis Presley, Patsy Cline and Roy Orbison through his brief but influential solo career as a visionary jazz artist. Garland’s flame-out was as spectacular as his success. In 1961, a near-fatal car accident, his tempestuous marriage and personal life and repeated clashes with the “Nashville Mob,” who then controlled the country music establishment, led to a series of electro-shock treatments that tragically ended his playing career. Though he ceased performing, Garland lived until 2004, and was involved in Crazy’s development.

Ray Scherr and guitar hero Steve Vai (who also performs a cameo as Hank Williams) are the film’s Executive Producers under the Favored Nations Films mantle.

For more information, and to see the film trailer, log on to www.crazy-themovie.com

You can also visit Crazy on MySpace!