Jun 06 2020
Hey Folks, Vai here. I wanted to challenge myself for my 60th birthday and decided to record a simple trio track. I gave myself some parameters to work within. I told myself I would use a Strat style guitar, (tougher for me to play then a Jem) use a very clean tone, (not conventional for me) no whammy bar, (that’s like losing a body part for me) and no pick, just fingers (way out of my comfort zone). I also had this idea for a particular type of riff that can only really be played on a guitar with no whammy bar. It’s a technique that I call “joint shifting.” This is where you bend a note while fretting another, but I wanted to do this technique with a combination of double and triple stop single note bends while fretting other notes and releasing bends. After considerable experimenting, I discovered it created a unique sounding passage. You can hear this technique on a few sections of the song. I certainly hope other ambitious guitar player see the potential in this technique and take it to the moon! We shot this quick little video of me performing the track at my Harmony Hut studio. During this period, the world is slowly starting to recover from the Covid-19 pandemic. Many people are still facing challenges and are eager to find entertainment on the internet. I have seen the best come out in many people during this challenging time. When people join together with a common positive intention, the power surge they create within the collective is the healing element that is most needed. Like many little candles coming together to burn as bright as a star. I needed a title for the song, and with the above in mind, and the fact that it’s my 60th, I choose the title “Candle Power.” We are even issuing a commemorative “Candle Power” candle in the new vai.com merch store that also comes with a high-quality download of the song. Enjoy!
s

Jun 01 2020
Hey folks,
join me on June 6th at Noon PST for a special 60th Birthday Facebook Live Celebration Edition of Alien Guitar Secrets where I will be premiering a new song and video! This livestream is also to benefit Extraordinary Families, supporting children and youth in foster care.
Thanks!

Hey Folks, I’ve been enjoying the two weekly Facebook Live sessions we’ve been holding. Our Tuesday at noon (PST) “Alien Guitar Secrets: Live” has been geared towards music, and guitar-related things, and our Thursday (noon PST) “Under It All: Hard Questions” sessions are focused on more esoteric principles, and I will perhaps not be playing the guitar in these episodes. Through the years, I occasionally get requests to talk about meditation, which is a subject I’ve been practicing through the years. So I thought it would be nice that for this Thursday’s “Under it All” session (April 9) I discuss concepts and practices of various meditations that may be helpful. Meditation is the practice of focusing the power of your attention. At one level, when we are engrossed in something such as the creative process, playing an instrument, etc. it’s a form of meditation in the realm of doing. Understanding some of these principles can be very helpful in the creative process. The deeper forms of meditation are focused on discovering the true reality of what you are directly. If you feel this kind of discussion may be of interest to you, please join us.

You can find the archives of past live sessiosn right here on Vai.com under ‘Live Podcasts’ and you can choose Alien Guitar Secrets and Under It All

Live Alien Guitar Secrets And Under It All on Facebook!

We hope everybody is staying safe during these challanging times! Lockdown can be tough, so Steve decided to do some live Alien Guitar Secrets Facebook streams.

Be sure to check out Steve’s Alien Guitar Secrets each Tuesday at Noon PST, where Steve discusses guitar and music related things.

And each Thursday at Noon PST, Steve will answer the Hard Questions in Under It All, going a bit deeper… 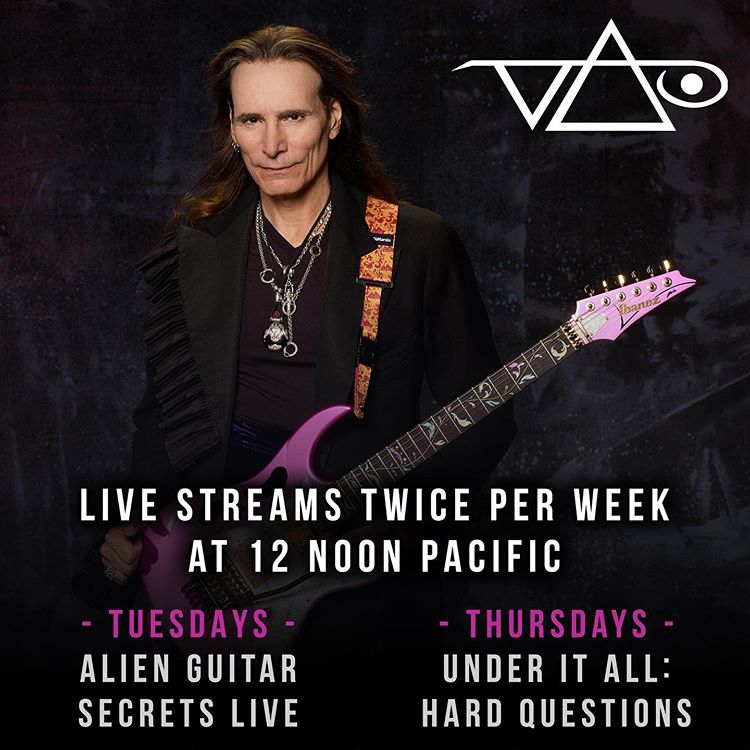 The folks at @reverb came over to the Harmony Hut for a tour of my guitar collection!

In June of 1980 I had just turned 20 years old and the next day moved to Los Angeles from New York, I found myself in the Zappa’s studio surrounded by these musical giants I had studied for some years. It all felt surreal. Every member of the crew seemed godlike. But there was one crew guy I met that seemed to stand out. He had a thick Austrian accent, quirky, funny mannerisms, seemed to know his shit bullet proof, and was favored by Frank. His name was Thomas Nordegg, the Austrian tech that supported Frank’s backline. He was kind, funny, and tolerant of my naiveté. He was always doing something that made Frank, and all of us laugh and his dedication to Frank and his work was supreme. Through the 3 years I spent touring with Frank, Thomas was always there. He was also documenting virtually every day on those Frank tours with whatever the most up to date piece of technology was available. Through the next 10 years or so I would see Thomas from time to time until one day the stars aligned, and he was available to tech for me on one of my early tours. That was perhaps 25 years ago and he’s been with me since.

I’ve had the privilege of working with some pretty outstanding guitar techs, but when Thomas hit my scene, there was a paradigm shift in the infrastructure of my technology accessibility. Thomas was, and still is, fiercely interested in new technology. His apartment is a marvel in and of itself. Even in the 80’s he had a system that would turn various things on and off just by clapping. Through the years he has built, and continues to add onto, what I would call the most comprehensive and mind-blowing guitar rig on the planet. He calls it “Sonica.” To experience Sonica is to feel as though you have dipped your fingers into the abyss of automatic thought sound manipulation. Honestly, to see and experience it would be the only way to understand the magnificent depth of it. It also takes up virtually his whole living room.

One way I hear about new gear is through Thomas. He brings me some new device at least once a week and forces me to try it. And then he somehow incorporates it into my studio rig. I have never known anyone in this business as detail oriented and hard working as Thomas. He loves his work with a wild-eyed passion. He is the kingpin on raising the enjoyment bar of any touring atmosphere he is part of. He rides a scooter and can transport virtually my entire rig on it. Almost everything he does or says makes us laugh. And as far as being a good guitar tech, he is THE guitar tech.
There is nothing more important to me than to know that when I hit the stage my back is covered, and Thomas is the absolute “high-priest” of guitar teching. He usually claims to be “the oldest guy in the building”, and usually is, but is also the hardest working. Somehow his strength and stamina dwarfs those half his age. He is absolutely the first guy there and the last to leave. He can go for days without sleeping and NEVER misses a beat nor complains. His work is his life and joy. He is an inspired guitar lover and has seen me perform more than anyone on the planet, and is also frighteningly honest with his critique, which is helpful for me. I can’t imagine how I would function on tour without him. But what I have discovered being of the greatest value is the friendship we have created over the years.

Father Thomas, you are extraordinary, and we are grateful. Happy birthday my brother.
With all the appreciation in my soul.