I was lucky enough to be in Sydney in February and was hoping to take my 16-year-old daughter Suzanne along to Selina`s at Coogee to see the band. We were extremely disappointed to find that it was an 18+ venue and that she would not be allowed in. However, Suzanne, knowing how much of a fan I am, insisted I go alone. What a night – I thought I would never see such a gig again, and to think you had done it all three years to the night earlier. I arrived back at our hotel that night full of it and having bought a tour programme discovered that you were playing in the UK six weeks after we got home. Needless to say as soon as we got home we booked for the Manchester Gig (no age restrictions). Wow. What a show!.How do you guys do such a massive tour playing almost every night and look so fresh? It was very apparent from both shows that you were all having a great time up there on stage. I know the audiences had a ball. It goes without saying that you have another dedicated fan in my daughter Suzanne. I was a great Zappa fan and could not foresee any band that might replace his ensembles for live shows. Although the style is different the quality is of an equally high standard. Come back soon, 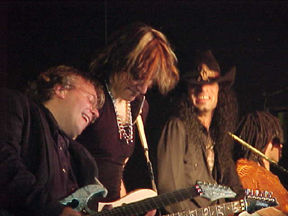 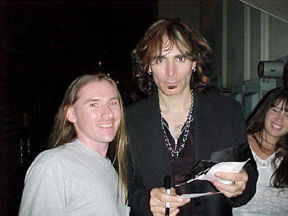 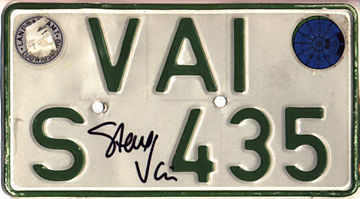 My name is Uwe Weinert from Germany. I would like to tell you today about a meeting I had with Steve after a concert here in Dusseldorf on 04/04/2000. After the show, I have waited 2.5 hours to get this German license plate signed. It is a German tractor license pate from the small town VAIHINGENa. This town has the prefix towncode VAI. I showed him this plate and he said to me: “It´s amazing”. Then he signed it and gave it back to me. He reached into his jacket, took a camera out and made a photo of me with the license plate in my hand. Than, he gave the camera to his roadie, came beside me and the roadie made a photo of Steve and me. Then Steve told me that he will put this photo on his website! It was 2:30 am and very dark, so I think you can see from the license plate only the reflection of the flash. Out of this reason, I send you a scan of this plate and hope you can use it when you put this on his website.

Hi all there at Vai.com

My name is Gareth and I am a 19 year old male living in Northern Ireland. Ireland is not very good if, like me, you are into music no good bands ever come to play here. All of that changed recently when Steve Vai himself stopped off at Vicar Street Dublin to play a date on the 13 March.

I was there and I had the time of my life. It was a very long drive down from where I live to Dublin but it was worth it I can tell you.

Before the gig started I was hanging around the bar and I could hear some playing going on in the main hall, I asked the security guy if I could go in and he let me. I went into the hall and I could not believe it when I saw Steve sitting there warming up with Mike Keneally, I was so amazed as I have to be the biggest Steve Vai fan in Northern Ireland. He was really playing some amazing stuff.

Then I had to go back outside and wait for the doors to open, once they did I was like one of the first people into the hall. The first high point came when I spotted Dave Weiner over at the mixing desk so I went up to him and asked him for an autograph – he is like such a nice guy and down to earth.

After a bit more waiting about Eric Sardinas came on stage and played some furious blues, later that night I also met the big man himself, he is bigger than me and I am like 6 foot 3, and got his autograph. It was so cool when he lit his guitar onstage, I had never seen the like of it before and I don’t think that I will ever see anything quite like the energy that he gives off onstage.

Then, the bit that I had been waiting years for, Steve Vai came onstage. He played a blistering set, he even recorded a new song in Dublin that he had never played anywhere else, just wait ’til it comes out on one of his records, he had the whole crowd really fired up!

Steve himself and his band give off lots of energy and Steve is very charismatic, he was even messing about and talking to the audience and telling them the story behind the song “Voodoo Acid” which was very cool. I have never before seen a guitar player with so much feeling in his playing, you can really feel the passion in his notes.

The high point for me was when Steve threw a guitar pick into the audience and I got it! I could not believe it, seriously, I have always wanted my very own Steve Vai guitar pick and now I have one, locked up safely I might add. That was really the best for me, thanks Steve, all I need now is to meet him and get his autograph.

I would also like to say a massive THANK YOU to everyone who was involved in this amazing concert in Vicar Street, Dublin. The show was amazing and I just can’t express my thanks enough to everyone who organized it, I would especially like to thank Steve and his whole crew for being a great bunch of lads and also you guys at Vai.com for making the best site on the internet. I couldnt be happier as Steve Vai is like my favourite artist ever and I am never going to forget that night that I had in Vicar Street Dublin.

Steve Vai’s last concert of the world tour, in Istanbul, was one of the best shows I have ever seen. Turkish audience worshipped his kind, funny and attractive behaviour as much as his guitar skills. It was a show that would never be easily forgotten.

I thank him personally for entertaining me non-stop for 2.5 half hours. It was an ultimate show and good music. I absolutely would like to see him again, whenever, wherever…

hey hey! what up!?
check this, this is me and my uncle… trying to play your music.. ahem… haha, we need 4 hands to play your stuff, what i’m saying: YOU’RE THE BEST, warm regards from holland!

thanks for the inspiration and…
warm regards
MEMROX

I was at Steve ‘s concert in Nijmegen, Holland on the 7th of March. To me, as a big fan of Steve, it was a very emotional event. Crying and laughing at the same time is a weird experience, I can tell you. Steve ‘s show only proved to me what he is capable of, and that he ‘s still growing in what he ‘s doing. Steve is also a kind of a motor to me, giving me a push to keep playing guitar. His concert here in Holland was a smashing experience, something which I ‘ll never forget. I ‘m going to wear my Ultra Zone t-shirt proudly and I ‘m telling everyone who wants to know about you!

Peace to you all,