Hey Folks, Steve Vai here. One of my favorite things about being a musician in this grand industry is all the amazing artistic people I have met along the way. I’m constantly being exposed to super talents and some of them completely strike a golden nerve in my soul, and Richard Peikoff is one of them. From the first time I heard his mellifluous acoustic guitar playing, I had that feeling that I had uncovered a treasure. His playing is soulful, [ … Read More ]


Very excited to announce “STEVE VAI: An Earth Dweller’s Return” – A solo exhibition of my artwork and custom painted guitars at Fathom in Los Angeles! On view Dec 7 – Jan 4 with a special Artist’s Reception taking place on December 14! http://bit.ly/stevevaigalleryshow 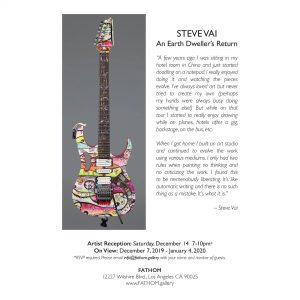 
Hey Folks, Steve here… I just wanted to let you all know that in regards to the Gen Axe PledgeMusic campaign, Gen Axe management has been working to acquire and verify records detailing who ordered what, what has been fulfilled to date and what still needs to be fulfilled for the Gen Axe and Jamathon campaigns. Gen Axe is still owed a huge sum of money from PledgeMusic that we assume will never be paid out, so like [ … Read More ]


I’ve written a comprehensive music theory book for guitar players. It’s called “Vaideology: Basic Music Theory for Guitar Players” and it contains all the basic, and some very advanced, music theory that can stand as a powerful foundation for a lifetime of understanding the language of music. You can purchase it at SteveVaiStore.com.
Enjoy

An Invitation from Steve Vai


It’s that time again! I’m very excited to invite you all to join me at Vai Academy 5.0, taking place July 29 – August 2, 2019 at The Mansion at Glen Cove on Long Island in Glen Cove, NY not far from where I grew up in Carle Place. I was a teenager on Long Island in the 70’s and it was an amazing place to grow up. New York City wasn’t far, nor was The Hamptons. Living [ … Read More ]


Hey Folks, Steve here. The “Big Mama-Jama Jamathon” was a wonderful success on many fronts, and at this time we would like to wrap up the final auction items to raise those funds for Extraordinary Families. These guitars were signed by many of the performers who graced the stage at the Jamathon live event! http://bit.ly/Jamathon


When I started doodling with art, I decided to paint a few Jem bodies and the colorful guitar I used in the “Dark Mater” video was one of them.

I’ve painted 4 guitar bodies so far. Two were Ibanez Strat style guitars I did some years ago for the “Experience Hendrix” tour.