Together with Evo, Flo has been at the forefront of Steve’s arsenal of guitars. Equipped with a Fernandes Sustainer unit, the guitar inspired new musical directions and possibilities. Its construction, which for Jem aficionados obviously differs from normal Jems, has sparked a lot of discussion over the years. Here we present the opportunity to delve into the gritty details and explore its colorful history.

Back in 1992, Steve and Ibanez decided that the next iteration of the Ibanez Jem should have a classic look and feel to it. A design, which eventually turned into the Jem7VWH we now all know, was done and incorporated a few new attributes Ibanez had been working on, such as the All Access Neck Joint.  At the same time, Steve and Dimarzio were working on various pickup prototypes. This resulted in guitars like Evo and Pogo, which were among the first pre-production models of this new design. Other guitars that were created at this point were the original Ash Bad Horsie (Build by Ibanez luthier Mace Baily), and Bad Horsie II.

Steve had used various Floral Jems, mostly because of the sound. “Perhaps it’s because the bodies were wrapped in cloth that the tone of the floral pattern Jems had something to them that the others didn’t. Sort of a warmth and richness that is more felt in the inner ear than objectively identified in the external audio sound of the guitar. I was very attracted to this sound”

Converted Neckjoint on Flo. On The Original Bad Horsie, a similar conversion was done.

“Flo was my favorite go to guitar as an EVO back up. But once we put the sustainer in her I started playing her a lot more. Besides some new songs I was writing on Flo with the sustainer, I started incorporating it into older songs too. Because of this I was using Flo perhaps as much as EVO and to this day (January 2015) that’s still the case. She’s quite a warm place to call home.”

For the first five years, Flo was used as a regular guitar and indeed we do still have some images of Flo before the sustainer was installed.  Around 1998  Steve took possession of a Black Fernandes Sustainer guitar and started experimenting with the possibilities of this device. Eventually it was decided that Flo would be fitted with a sustainer, which happened in 1999.

“Sometimes I will see a new technology and know instantly that I can make use out of it within my style of playing. When the Fernandez sustainer hit the scene and I had one installed on Flo I knew that it was going to be a game changer for me. “ 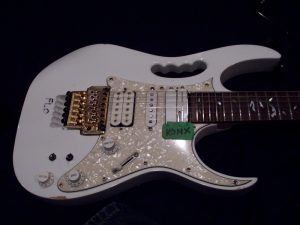 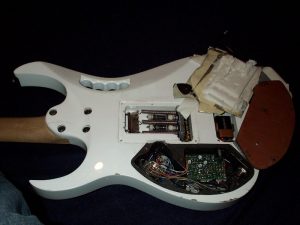 Flo’s backside with the covers off. Tissue is used to stop the springs from making noise. 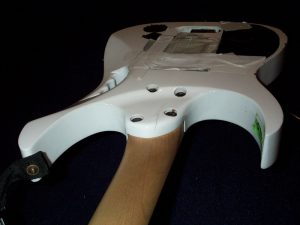 Flo’s backside. You can clearly see the mongrel neckjoint 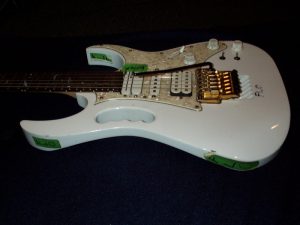 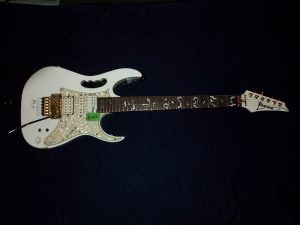 Flo in a previous setup, with the normal neck, in 2004 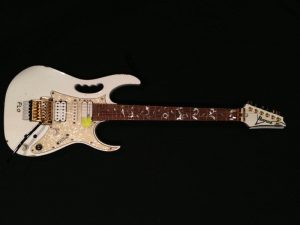 Flo in it’s current setup, with the True Temperatment neck

Flo on Thomas’ bench during the RI tour in Amsterdam, Holland, 2005 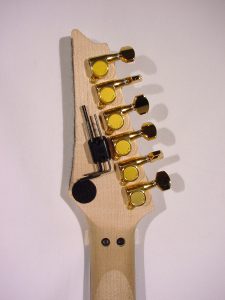 Back of the headstock in 2004, note the addition of Thomas’ Velcro 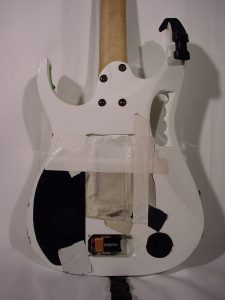 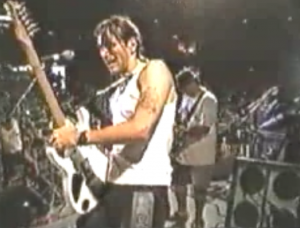 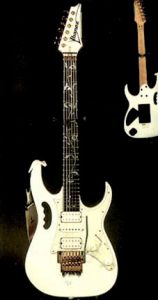 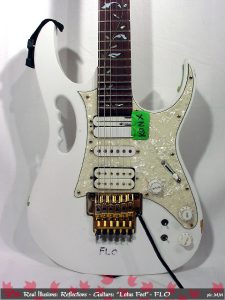