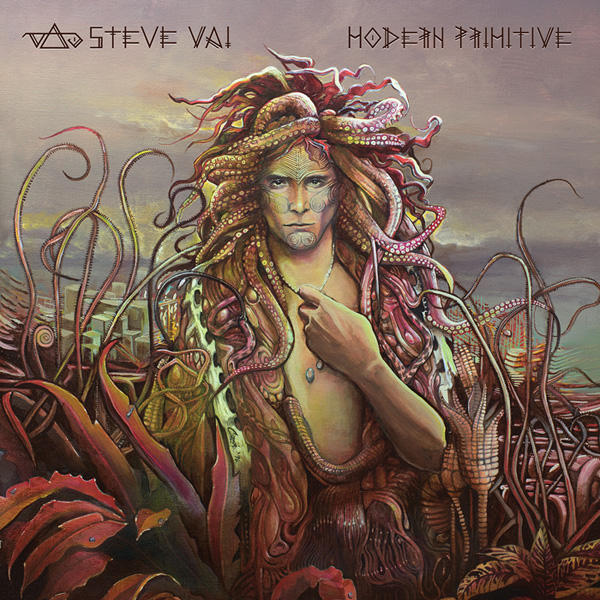 'To say that this tour was a powerful life experience would be like saying the sun is hot'
more about the album ///
Released:
June 24 2016
Label:
Sony Legacy

Based on song sketches and works-in-progress penned and recorded by Vai following the release of Flex-Able, his debut album, in January 1984, the music on Modern Primitive has been completed by Vai for release as a full album disc and the 2nd CD is the bonus remastering of the Passion and Warfare 25th Anniversary Edition.

“The music on Flex-Able is so vastly different from Passion and Warfare, one could wonder if the same guy actually made both records,” Steve writes in his liner notes for the collection. “Modern Primitive is the missing link between these two records. It’s sort of Cro-Magnon Vai.”

l songs written and composed by Steve Vai and published by SyVy Music (ASCAP), except:

In “Mighty Messengers” the lines: “Nothing real can be threatened / Nothing unreal exists / Herein lies the peace of God.” are quoted from A Course in Miracles by Helen Schucman. * Cassiopia is our Pembroke Welsh Corgi.

Devin Townsend recorded his vocals for “The Lost Chord” himself at his studio in Vancouver, Canada.

Sue Mathis/Brantmeyer’s vocals on “Pink and Blows Over” were recorded by Jack Miele at The Music Shed Recording Studio in New Orleans, Louisiana.

We get a feeling, arise emotion
Never knowing where it comes from
Born in silence comes the voices
Of our conscience
Guardian angels, Mighty Messengers

You can hear them tell you
“Nothing real can be threatened
Nothing unreal exists
Herein lies the peace of God.”

Who do you think it is that is crying
When we are lost in fear they are dying,
But in all the things they do they keep trying
To show us through
I have now grown tall in the ways I have been shown
Away, all gone, you are. I’m, Indivisible I

So if we think we are: we are wrong
Even in a million years, we’ll be wandering
Somewhere is all we are, yet we have each other
You and me – we must be in love


And We are One

I’m over here, I see you
I’m very near, I feel you
I hold your hand, I’m with you
I understand, I know you

I’m in our bed, I hold you
It feels so good, I touch you
When I awake, I breathe you
I touch your face, I kiss you

And if I call, I’ll hear you
And if I fall, I’ll catch you
You are my all, I am you
And we are one

Never forever, the vast void under your mind
Eternity is what you’ll find
Never forever, beyond the great divide
Where all that was and will be is, is now.

I wrecked my face trying to figure out time and space
But I just don’t get it, looking for the now in the wrong place.

The music on Flex-Able is so vastly different from Passion and Warfare that one could wonder if the same guy actually made both records. Modern Primitive is the missing link between these two records. It’s sort of Cro-Magnon Vai. During this earlier period I had put together various bands. The Classified was a band I formed with Sue Mathis on keyboards and vocals, Stu Hamm on bass, Chris Frazier on drums and Tommy Mars on keyboards and vocals. I loved this band, and I wrote a ton of music for them. We did some great gigs, but unfortunately much of that material was never recorded—only a handful of tracks. I’ve had much of this music on the infinity shelf for over 30 years with the intention of one day completing it and releasing it, and that one day is here. Tada! Enjoy, Stev