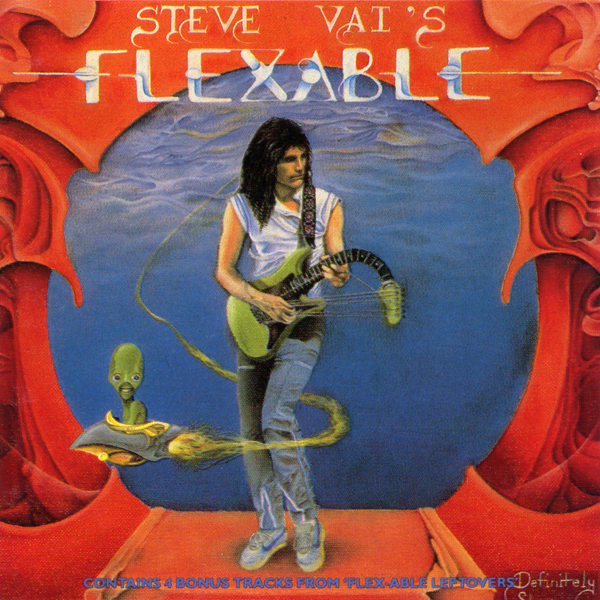 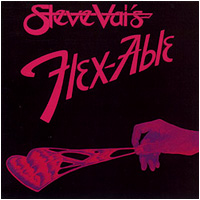 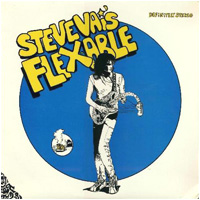 Steve’s first album was originally available on vinyl and cassette through mail order, but was later re-released on CD in 1988 with some bonus tracks* from Flex-Able Leftovers added. The current version on iTuens does not include these bonus tracks. Three versions of artwork and four slightly different versions of the album exist worldwide.

This tune started out as a song called “Garbage Wrapped In Skin”, but then I started heading for a lighter concept, AND THERE IT IS. Dedicated to Nina Hagen, I actually believe that there are people on this planet right now, whether they know it or not, who are part of an investigative commitee (let’s say) for a higher intelligence. Some call them the Illuminati. Some call them crazy. Some don’t call them at all. A ha ha ha ha, Oh no, A ha ha ha ha ha ha ha. But more of this later…

We know ya came a long way
We hope that your ship is O.K.
We hope you’re gonna stick around
Maybe to save the day

Little Green Men, they look so funny
Funny green men
I want one to have and to hold and to
Silly green men
Where do they come from?
Should we run away, should we start to pray
Or is it a movie that they’re filmin’?

Are the people on your planet
Usually in a frantic panic like they are here most of the time?
(Bla… I’m freakin’ out…)
Wait a minute you, is it true
About Einstein’s theory and Darwin’s too?
What about war, the soul, the mind
Love, Death, God, Divine?

Ladies and gentlemen of the world, it is my utmost privilege to announce to you that these Little Green Men actually do exist, for they are part of the eternal past and venture from all regions of our galaxy to find homage in our earth’s center. Governments of the world have been very good at concealing these little visitors and preparing the public with loving movies and pleasant melodies (ya see, like that one — did ya hear that? — yes). Controlled media has to cushion the impact of the arrival of our little friends. You see, throughout history many people have claimed to see strange lights in the sky.

Well, the truth of the matter is that these lights, and beings, will only reveal themselves to those who are pure of heart, for these enlightened aliens leave permanent imprinted information on the psyche of those chosen humans only to be revealed to our deteriorating planet at the point in which our civilization shall enter the new age of Light Without Heat.

We’re hoping that the human race will become part of endless time. We love you all and want you to know that in your heart and in your soul there is power bigger than the world.

Corny but cute, you should hear the version I have that’s sped up a whole step. (Munchkin love again)

I need some junk
To shoot in my vein
Would you give me some
To relieve the pain?

This was my first real solo album. I saved up all the money I earned working for Frank ($14,000) and put a down payment on a house on Fellows Avenue in Sylmar, California. The house was perfectly situated on a quiet cul-de-sac on a corner lot. The previous owner, (Ol’ man Ray Kawal, a cool guy whose ghost still lingers in limbo about the place) had built this tool shed out in the back. It was two separate rooms about 24′ by 17′ each. Perfect.

The time there in Sylmar was one of the best. There was never less than 5 people living in the house on a given day and we were all as close as friends could be. Having all those people live there allowed me to play the guitar and build the studio while they paid the mortgage.

Some of the people that passed through there were… Pia (we lived together here for the duration), Marty Schwartz, Mike O’Brien, Scotty Matthews, Chris Frazier, Stu Hamm, Bob & Suzannah Harris (Suzannah has written a book called Under The Same Moon which includes stories from the time), Di, Pam and her family John, Robert, and Theresa, and a countless host of wayward refugee musicians.

I bought this book called The Audio Cyclopedia. It’s a bible for anything that has to do with audio and studios. I studied this book and rebuilt the tool shed into a 2 room recording haven completely by myself. It took 8 months and cost $3,000. In the meantime I gave guitar lessons so I could buy food. I christened the place “Stucco Blue Studio” and commenced with all the nonsense.

Purchasing a Fostex 1/4-inch 8-track machine gave the studio the multitrack credibility it needed. Carvin Manufacturing donated a console and an X-100B guitar amplifier and Frank Zappa, God bless him, loaned tons of gear to make the recordings a reality.

Everything and anybody was recorded if they got too close. There is a vault full of tapes from that period. I took a handful of this stuff and put it together for release on an Evatone Flexi-disk. After It was completed it sounded like it could make a quirky yet entertaining record. I thought… “Who’s it gonna hurt?”

No record company in their right mind would want to release this stuff, it was too eclectic. So I industriously got to work with my then manager at the time and dear friend, Laurel Fishman. We started a label called Akashic Records that was later changed to Light Without Heat Records. It was quite easy to start the label. It cost $10.00.

The next step was to get the records printed up so we called some artists for the art work, and packaging and got a list of all the vinyl makers in LA… Here’s a synopsis on the making of the record.

a. Built the studio
b. Got all the necessary equipment together
c. Wrote, recorded and mastered the music
d. Completed the art work and wrote insert page.
e. Researched a pressing plant and oversaw the manufacturing of the LPs and tapes.
f. Printed up about 1,000 pieces (records and cassettes)
g. Shopped for a distributor

When the record was finished and in my hands, it was a great thrill, but now what? You have to get your butt out there and sell the thing. I called many distributors and not one returned my call. If you’re a struggling musician and are trying to get your product or your band going, you know that there is nothing as frustrating as someone not returning your phone calls. For this reason I always return every call I get no matter how insignificant (but I also never give my phone number out.)

Finally, there was a call back from Cliff Cultreri at Important Record distributors. He knew of me from the records I did with Frank and was interested in buying 1000 records. This was an incredible event, being that they were selling for $4.10 each and they only cost about $0.79 each to make. This generated enough funds to promote Flex-Able and keep recording. Soon Cliff called again and said that all 1000 sold and he wanted another 1000.

In the beginning I would change the color of the label and the inscription that was carved into the mother stamper on each batch of 1000 disks.

There was a good reaction from European distributors too. It really started to come together due to the loyal fan base of Frank Zappa. Initially it was his fans that bought the records and made it possible for me to continue. By the way, there are 4 different versions of Flex-Able released in Europe. The only difference is a slight edit I made to each of the mother masters. I did this for all the hard core neurotic collectors. Anybody have them all?

This reordering was pretty consistent until “The Attitude Song” was published in Guitar Player Magazine on a Evatone floppy disk (not the computer kind, the actual floppy kind). That’s when the reorders went up to three and four thousand. Soon after that CDs became popular and Flex-Able was fetching $7.50 for one CD. When I joined the David Lee Roth band and the Eat ‘Em and Smile CD came out, sales of Flex-Able took off and when Passion And Warfare came out, Flex-Able took another leap in sales. Today I still own that funny little record and I’ve probably sold 400,000 to date. I thank you for that.

This story is outlined not to show off how much money Flex-Able generated, but to inspire artistic, would-be music moguls that they can do it too. But don’t forget, it takes nonstop vision and effort. It helps to be fiercely committed and have a lot of good karma too.

Oh, and you have to want to rule the world…